Hemp (Cannabis) is among the oldest and most widely utilizable crops. 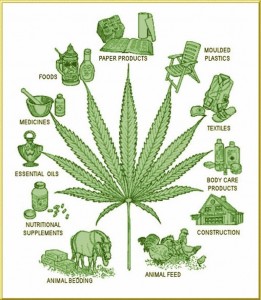 For over six millennia it was an economically significant supply of fibers, foods and medical and was cultivated in all parts of Europe and Asia. Also hemp was considered to be an important source of raw materials for ropes, sails, clothing, paper and oil products. In China hemp was used already 10,000 years ago. Over India and the Middle Eastern cultures in Iraq it propagated worldwide. In Europe the oldest findings are about 5,500 years old. Hemp and flax for a long time were considered to be the most important fiber crops. In the 17th century during the Age of Sail hemp had its golden age on the European continent, since sails, ropes, nets and flags were made out of it.
In the 18th century hemp lost its role in Europe. The decline of the German and European hemp economy continued until the ending 20th century. The triumph of cotton, decline of sail-powered ships and synthetic fibers in the technical places of use are several reasons for this. Further, the cannabis prohibition put pressure on commercial hemp, which is strictly regulated today. Today the importance of hemp is increasing owing to its positive properties in many branches of the economy. The hemp fibers have advantages over cotton fibers. This is also accompanied by the ease of cultivating them and the more ecological aspects. Owing to its nutritive traits hemp can also be used as a food and nutrition source. Hemp is used medically to treat cancer, lack of appetite and depression and as pain killer. There are today over 40000 various hemp products from all parts of everyday life.
In Switzerland the cultivation of hemp and its use have a long tradition. Until the beginning 20th century hemp delivered the raw materials for rope and sails, hemp oil was squeezed from its seeds. Until 1951 cannabis was legal and was important in medicine to treat migraine, asthma, pertussis and as sleep medicine. Until the beginning 1970s cannabis was available in the pharmacy. Fiber hemp must not contain over 1% of the drug tetrahydrocannabinol (THC).
Austria
Austria has a long history of hemp cultivation that goes back millennia. Between 800-1200 hemp was the most important crop. For example, in Niederösterreich there are many place names that refer to it. In 1839 a tincture (hemp concentrated in alcohol) was produced which was sold in pharmacies as drug for coughs, asthma, migraine etc. Also, the “Austrian tobacco regie” put out many cigarette products with hemp. With the beginning 1999s hemp gained importance again. Today hemp types with no more than 0.3% THC can be used for fibers, oil and all other non-psychoactive uses. The 900 years old hemp industry is sown in the Hanftal in a museum. Today hemp fibers are produced for textiles and buildings and small amounts of seeds for hemp oil (Seshata, 2015).
Germany
400 A.D hemp started to be cultivated in Germany. In the 13th century another use of hemp found its way into Europe over Spain – the paper production. Thus in 1290 the first paper mill was made. Guttenberg’s famous Bible was printed on hemp paper. Between 1982-1995 the cultivation of hemp was prohibited. In 1996 it was legalized for farms and for utile hemp (Bundesanstalt für Landwirtschaft und Ernährung).