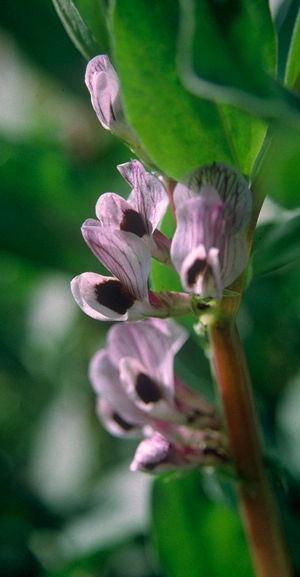 The broad bean (Vicia faba) together with lentils and peas is one of the most important legumes of early agriculture. The oldest findings in the Near East were dated to 6,500 B.C. The strong, vertically growing plant forms legumes with relatively large seeds.
The formation history of the broad bean is not clear yet. There are related species which were collected in the past as well such as Vicia narbonensis. This related species cannot be crossed with the broad bean. At the time of their cultivation the seeds of the broad bean were comparably large to these of the Narbonensis-Group. Carbonized they are identical and thus until recently it was impossible to tell the exact place of formation in the Middle East. The archeological findings on the northern side of the Alps can only be the broad bean, the climate is too cold there for the Narbonensis-Group species.
The first findings in the Alps come from the Bronze Age 2,200 B.C. in the Grisons. Originally only a small seed version (var. minor) can be found. Its seeds are up to 13 mm long. From this small seed form came the large or Puffbohne version (var. major) whose seeds are between 15-20 mm long, 12-15mm wide and 5-8 mm thick. This large form formed relatively lately, probably only after the Roman era.

Broad beans have many uses. The young green siliques are used as vegetables, the dry beans are cooked or turned to flour. With the flour rye and barley flour can be filled. The broad bean was also a popular feed. The milled or boiled beans were fed to livestock. The broad bean was also popular as a early fruit, since its root nodules get nitrogen into the soil.