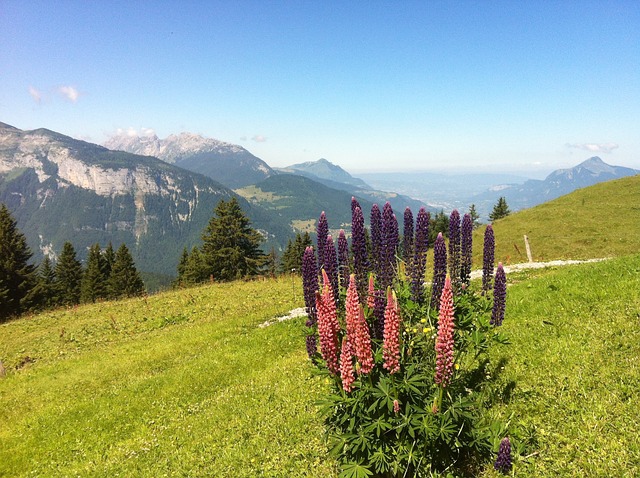 The genus Lupinus includes about 300 species. Of these about 4 annual species have been cultivated for intense agriculture: The white lupin Lupinus albus ssp. Albus from the Mediterranean is cultivated since millennia and the Andean lupin Lupinus mutabilis from the high Central and Southern Andes. The mixed farming with quenoa or maize is still practiced today.
The yellow lupin Lupinus luteus and the narrow leafed lupin or blue lupin Lupinus angustifolius are Mediterranean species, they were taken into culture since the middle 19th century, the blue lupin however had become common earlier as a decorative plants.
Already during the Interbellum period the lupin and the many ways of using it thanks to its high fat and protein content had been discovered, as the following quote shows: “In October 1918 the Union for Applied Botanics invited for a “lupine festival”. On a lupin flax tablecloth (from the mature plant) were served: lupin soup, lupin beef steak boiled in lupin oil and seasoned in lupin flavour, then as after-lunch lupin butter and lupin cheese with a lupin liquor and at the end lupin coffee. Hand washing was done with lupin soap and a lupin cloth. Even paper made out of lupin and covers with lupin glue were offered. With the possibility of importing protein and other raw materials the interest for these substances disappeared.
As a crop lupins have been rediscovered only in the last few years. Today lupins are used to make spread, “Sweet lupin cheese” (produced similarly to tofu), flour, sausage replacements, snacks, vegetable side dish and lupin cheese. Sweet lupins can also be cooked and salted and be eaten as a snack.
Bitter lupins and sweet lupins
Lupins by nature have bitter components. Alkaloids, which eaten in larger quantities are intolerable for animals and humans. After the ending 1920s in Germany sweet (=alkaloid-poor) forms were bred. These are named sweet lupins. The history of this breeding is almost unimaginable: Thanks to the development of a fast chemical method, which allows the checking of many plants in a short time, the breeder Reinhold von Sengbusch could check a large amount of individual plants for their content at bitter substances. In 1.5 million plants he discovered three yellow lupin plants and two blue lupin plants which were almost alkaloid free: The conditions for the selection of alkaloid-poor “sweet lupins” were there. The sweet lupin aside of soja has the most protein and fat rich seeds. Forms with an alkaloid content of 0.01-0.03% are called sweet lupins. Older types of these Lupins have a high content of alkaloids and need to be watered to free them of the bitter substances.