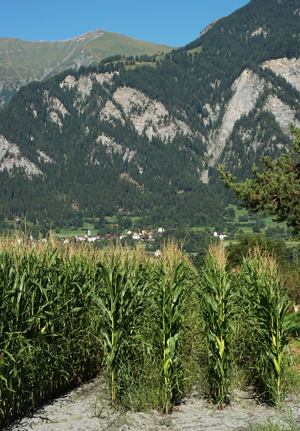 Maize (Zea mays ssp. Mays) originally comes from the deciduous, tropical broad leaf forests and savannas of southwestern Mexico. Maize in Mexico is a plant of the wet season, which begins around the 21. June and ends at the end of autumn. The flowering impulse comes from the lengthening nights. At the end of the wet season maize matures. It took some time before the wild maize (Zea mays ssp. Parviglumis) was identified as a cop, even though this maize called Teosinte grows at the margins of fields. The wild maize does not form cobs and researchers could not understand how a small 6-7cm long ear with hard small fruits could produce a thick cob with practically naked seeds. The wild maize to indigenous people did not serve as a cereal but as a vegetable. It still occurs today that in September – three months after germination – blades are cut, the sugar containing kernel is chewed or the sap of the shoots is extracted and cooked to syrup. Fermentation of the sap creates and alcoholic drink. The green ears of the wild maize can be eaten as vegetable raw, cooked or boiled. It is assumed that cultured maize originated about 7,000 B.C.
The maize came to the Alps on different paths. North of the Alps maize came to from North America’s East Coast. These plants were better adapted to the sunlight and temperature conditions north of the Alps. Since 1539 maize is cultivated in Germany and other parts of Northern Europe. The North American plants belong to the English northern flint. Flint can mean semolina, gravel, rocks, flint or even small crystal silica depending on context. The corns are glassy (horn-like) and hard in contrast to the foggy, flour-like corns, the dent maize introduced at the end of the 19th century.
The plants south of the Alps – which probably come from Argentina and Peru – are Polenta maize type Italian orange flint. The orange colour and glassiness are conspicuous. These hard maize types from the temperate regions of South and North America unlike the Caribbean plants bloom independently from daytime duration. Flowering occurs once the plant has reached a certain developmental stage. Thanks to this insensitivity of the blooming period to the daytime duration the maize agriculture got established in Italy and migrated northwards into the southern valleys of the Alps. In the Puschlav, Misox and Tessin land forms of this type were found, they usually had small seeds and cobs with 12 or more seed rows. Maize grows well in the warmer parts of the Alps, in the Foehn valleys of the northern side and the main valleys of the southern. Maize for many small farmers was a secure food source. On small surfaces with enough fertilizers very good harvests can be obtained. In Tessin maize at first was used only as an additive to bread cereals and only much later than in Italy for Polenta. It was usual to plant salad, beans, cucumbers and other vegetables between maize plants. Maize is also used as a standing plant.
The maize (Türken, Kukurz) is special among the cereals, because with its size and growth it is a giant. In a maize field 7-11 plants grow per square metre, while wheat grows at a density of 300-400 plants. The strong trunks are notable for maize, which can grow to three metres height. They can be 5cm thick and tend to become wooden. The rich leaves are up to 1m long and 10cm wide. The strong blades are filled with a core. The sugar produced in leaves is stored there until the seeds can take it. The specialization in female and male flowers is also unique among cereals. The flags are the male flowers, the cobs the female ones. A strong maize plant can produce 2-5 million pollen. An unusual trait of maize is the variety of colours of the corns. The colour spectrum ranges from nacreous white over creamy yellow, dark yellow, orange, red-orange, wine red to grey and blue. Many types are named after their colours, such as red Rheintaler, weisser Rheintaler and yellow Oberländer.