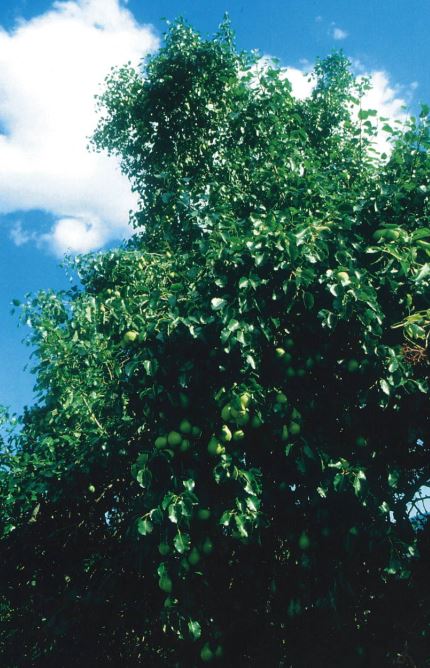 Wild forms of the pear (Pyrus communis) come from Southeastern Europe and West Asia. Between 22 and 35 wild pear species are known. Pears as crop are known already since Homer, and the Romans already knew three dozen types (Pliny the Elder). With the beginning 17th century about 260 pear types were known in Europe, today there are about 2000 types worldwide.
It is claimed that pears came to Italy with the troops of Pyrrhus, thus the Latin name Pyrus. The Romans brought many fruit trees into the northern and southern Alps. But after the collapse of the Western Roman Empire fruit cultivation lost importance. Only with the beginning modern period fruit cultivation regained importance in the Alps. From the Middle Ages to Industrialization pears were widespread in the Alps along with other fruits.
In the middle of the 18th century systematic breeding began in France and Belgium. The must pears are known in the somewhat colder regions. From economy pears often Brinen-Latwerge is produced as a sweetener. Table pears were and are selected for fresh use. Conserves and distillates round out its use.
Pears have high energy content and little fruit acids, but many organic acids which diminish during ripening. The pectin and carbohydrate content increases. Vitamin content is smaller than in apples. Pears contain large amounts of potassium aside of phosphorus and calcium, which is diuretic, aids the nervous system and strengthens the heart. Pears aid in digestion. They contain iodine and aid in the activity of the thyroid. Further, pears contain folic acid.