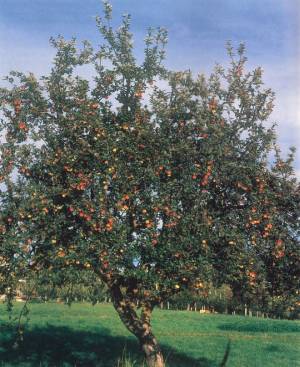 Apples (Malus) are a genus of Maloideae from the rose like plants (Rosaceae). The origin of the cultivated apples is in Central and Western Asia and was already used 10,000 B.C. in present day Kazakhstan. Genetic analysis shows that the cultivated apple (Malus domestica Borkh., syn Pyrus malus) comes from Malus siversii and Malus orientalis. In antiquity it came to Southern and Eastern Europe through old trade routes, where it was cultivated by the Romans and Greeks. About 100 B.C. the Romans brought the apple to Central and Northern Europe. For the Celts the apple was the symbol of rebirth, for the Germanic of immortality. In the Holy Roman Empire the apple was the symbol of the world sphere.
By selection of seedling apple types were selected early on. Many land types originated from seed plants. To proliferate the same type already the Romans developed the vegetative proliferation through grafting. These improvement techniques are already known since about 800 B.C., as well as many type names (Homer: 24. Song of the Odyssey)
The cultivated apple in the Alps
Fruit cultivation usually occurs at the edges of wine growing regions. Orchards are common in the Alps and Prealps. Apple growing regions are the Lake Constance area, the Southeastern Styria (Styrian Apple Alley), the Mostviertel in Niederösterreich and South Tyrol.
Already in the mid-19th century about 2000 apple types were known in Germany. Cultivated apples arrived in Switzerland about 1500 years ago with the Romans and had their golden age in the 19th century. Findings in Austria show that apples were first grown in 1074 in Styria. It is assumed that the Styrian Köster cultivated fruit orchards. From documentary knowledge it is clear that during monarchy times fruit planting in Styria had high economic importance there.
Nutrition and health
Apples are very healthy. Their high polyphenol content is good support against the following illnesses: Depression, lack of appetite, tiredness, intestinal diseases, arthritis, tendon inflammation, cramps, muscle tears, colds, dermatitis, pyorrhoea and caries.
The daily consumption of apples reinforces blood vessels, veins and arteries, bones, protects against cardiac infarctions, supports the stomach and intestine function, is protective against arteriosclerosis and diabetes, and reduces the risk of high cholesterol and cancer. Apples help with weight loss. They are also good for fasting, but one should not fast more than 3 days and consume various types of apples.
Some people replace teeth cleaning with the consumption of an apple.