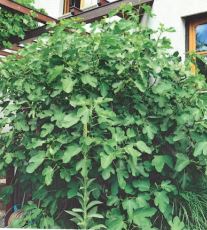 The Fig (Ficus carica) belongs to the genus Ficus from the Urliaceae family and the Moreae tribe (same family as the mulberries). There are two types of this species:
• Ficus carica Saliva or domestic fig
• Ficus carica Cuprificus or wild fig
Branches grow apart already directly over the soil, so that the plants have the appearance of a bush which is considerably wider than high. The leaves of figs are leathery and resemble a hand with spread-out fingers. The bark is usually bright grey. The fresh fruits usually are either deep violet or yellow-green depending on type. The homeland of Ficus carica is Western Asia, but figs are widespread as crops in the Mediterranean.
Figs are among the oldest domesticated plants. The old cultures of Mesopotamia and the Mediterranean already used it as a food crop. The fig is the first plant mentioned by name in the Bible and also the only one mentioned by name in the Garden Eden. The fig is the classic fruit tree of the Bible, being mentioned 38 times in comparison to the 4 times of the apple. In the Old Testament, figs meant peace and prosperity. Bred figs were found in a 11,400 years old house in Jericho.
Figs expanded in the Americas as well, thanks to the Spaniards.
The Egyptians documented fig culture with drawings in the pyramids of Giza. The fig colocalizes with the weeping willow in the Gardens of Babylon; in Hebrew its name is Teenah. Homer already describes figs in his Odyssey. Theophrastus very precisely describes its cultivation in his work from the 3th century B.C. Excavations in Etruscan settlements show that figs were grown already in the 7th century B.C. Pliny and Columella list and describe various types, many of them are known until today under different names. In the Renaissance more than 500 types were known in Italy, many can be admired in the paintings of that time.
The fig and its fruit are often mentioned in mythologies and is honoured as one of the best known symbols of antiquity.
North of the Alps figs grow in protected sunny areas (often as potted plants). In order to harvest fruits, the side shoots ought to be cut in spring. Thus more fruit growing shoots develop. The fruits remain on the tree through winter and are only harvested in the subsequent late summer.