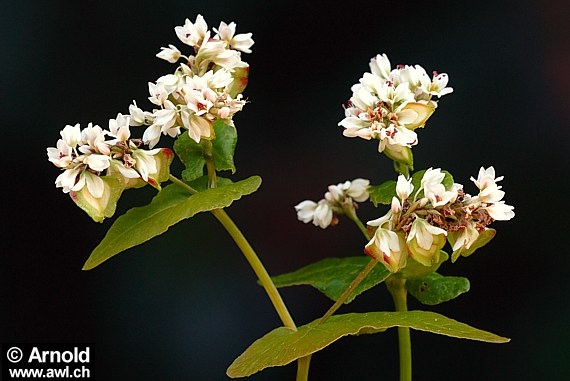 There are two types of Fagopyrum in use. The normally used species is buckwheat (Fagopyrum esculentum). Where climate is too cold and the growth period too short, Tartary buckwheat (Fagopyrum tataricum) is cultivated.
Buckwheat is a plant of the mountain steppes of Central and Eastern Asia. The oldest known findings of buckwheat come from Japan 5,000-3,000 B.C. It took long for buckwheat to come over the Silk Road to Central Europe. Latest in the 13th century it did come to the lower Rhine region. In the Tyrol Gesamturbar of 1406 a toll for “haidnischen waiczen” is mentioned for Eppan (South Tyrol). This is the oldest reference to buckwheat cultivation in South Tyrol. For almost half a millennium buckwheat had a high importance for South Tyrol in all suitable areas. Until the interbellum period id did dominate the image of the late summer agricultural region between Laas in the west and the Brunecker Basin in the East and dominated – with three meals a day – the cuisine of farmers.
Buckwheat is a pseudocereal, botanically speaking it is not a grass but a knotweed like sorrel and rhubarb. The German name “Buchweizen” refers on the one hand to the shape of the dried fruits, they resemble beech seeds, on the other hand to its seeds’ use as flour. The seeds are rich in carbohydrates. The thousand corn weight is 16 g. The fruit shell can be grey or black. The flowers of the buckwheat are white to rose, it lacks sepals. Buckwheat flowers and at the same time makes new flowers. The maturation of the seeds is continuous, seeds drop one by one, the most mature seeds fall even before the plants are dry enough to be threshed. Plant breeding aims at creating types with shortened flowering period.
The plant has little requirements and has a short growth period. Buckwheat is suitable for poor soils. Otherwise it cannot compete with cereals in terms of yield. Because of its short vegetation period it can be cultivated as a secondary crop after winter rye, winter barley in vine growing regions, however. Above the tree line it was cultivated as main crop. Buckwheat grows very quickly, covers the ground well and is thus used as a cover plant. It is sensitive towards temperatures of less than 3C. It can be seeded only starting mid- and end-May. The buckwheat is an interesting bee plant. When it flowers other plants have already stopped blooming. Buckwheat honey has a strong aroma.
Pericarp of buckwheat contains fagopyrin. If domestic animals consume large amounts of buckwheat seeds with intact pericarp fagopyrin can under the influence of UV radiation cause skin disease, a kind of sunburn (Buckwheat disease).
Buckwheat needs to be peeled. The buckwheat flour originally should contain small fragments of the pericarp. The slightly black-dotted flour in Switzerland is called “polenta near”. In cuisine buckwheat is used as peeled corn, groat, flour and flocs.