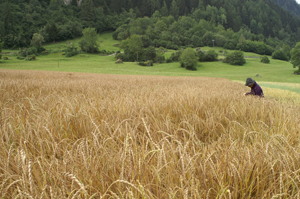 Unlike the closely related wheat, spelt does not come from Southwest Asia. Contrary to what one would think, it did not come together with wheat, Einkorn wheat and emmer from the Near East. Spelt originated 2,300 B.C. from a cross between wheat and emmer. Many researchers have experimentally carried out this crossing. Many forms are derived from it, ranging from durum to spelt. Spelt is an original wheat. Original, because spelt like wild grasses and emmer holds onto its seed so strongly that threshing does not break them free. The ear breaks apart, the fragments with the corn are named Vesen or Fäsen.
Spelt appeared abruptly and in large quantities starting from 2,300 B.C. Many millennia after wheat had reached Switzerland. The oldest spelt remain were found close to Neuchatel in a town of the beaker culture at Cortaillod/Sur les Rochettes-est. Until then barley, emmer and einkorn were the dominating grains, nude wheat was proven to be present as well. In the Bronze and Iron Age spelt and emmer are the most common cereals in the Prealps. The prehistorical humans deliberately selected spelts. For them spelt was more important than wheat and stayed so in some regions into the 19th century.
Spelt is also called corn or dinkel. The term corn was formerly used for the dominant cereals. Spelt has fewer environmental constraints than wheat. It tolerates precipitation. Wheat tolerates wet soil less than spelt and precipitation during harvest make wheat germinate earlier. Wheat has replaced spelt in the more favourable regions of the Alps. Spelt, like spelt oat or spelt barley firmly embeds its seeds into husks. With spelt, the hull husks, the outermost husks, surround the entire earlet, these are hard and leatherlike. Each vese contains two or three corns. Wheat has 4 or 5 corns per earlet and is thus the more productive crop. Spelt corns are relatively large, elongated and usually glassy. Originally there were both awned and non-awned spelts. The awns of the awned spelts are so bulky that they block the sieves of threshing machines. Thus awned spelt is no longer cultivated. Like with wheat there were both summer and winter types. Today practically only winter spelt is planted. Spelt is a bit more aromatic than wheat, the dough a little softer.