"Schneiteln", the deliberate cutting of trees to obtain leaves or bedding, until about a century ago was widespread in Europe, a versatile intensive culture method adapted to each tree species that requires some specialist knowledge and manufacturing skills. "Laubschneitelbäume" for example for space reasons were pulled on the trunk, to keep space for hay production or agriculture. The trees were modified so that they produced leaves on various levels, sometimes tree branches were modified so that they operated as a ladder which climbs around the tree trunk upwards. Practically all leafed trees were used. Important for a good and equal quality and is that cutting needs to happen in a one-two year rhythm and that it needs to be done at the same place to allow for regular regrowth. The much larger leaves of new growths are particularly liked by animals. The twigs are either fed to animals raw or dried and sometimes fermented to make them edible. Sometimes leaves were cooked or simply boiled. Boiled leaves were fed to pigs, while the fermented leavs were fed to ruminants. "Schneiteln" was also applied to needled trees in the Alps, mainly to obtain bedding. During bad winters when food was scarce, needles were also mixed in food. 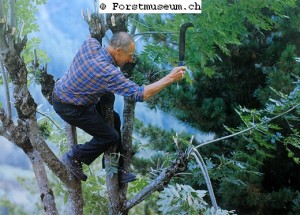