Seeding, harvesting and threshing in the 1950s in Kerzers in the Seebezirk. Memories of Ueli Johner-Etter, Farm Museum "Althus", Jerisberhof

In the second half of wine month (October) father loaded two sacks of wheat seeds on a vehicle, their openings pointing backwards. Behind the vehicle he attached the seeding machine with a chain. The two horses Flora and Fanny were attached in front to the vehicle, and there we started, out to the three Woods in the Grollyeck. Father back then in the 1950s still used the term "Hölzli" as a surface measure, with one Hölzli being equivalent to nine hundred square metres. The term surely originated at a time where the wheat field was still covered with forests. For the harrowing he put Fanny (the younger horse) on the right side of the drawbar. As a ten-year old boy I was allowed to lead the experienced Flora on the left side of the drawbar. For the winter growth there was less harrowing than for potatoes or sugar beets in spring. During turnings one has to take care that the ropes, as we called the chains, stay tense, since they are only barely above the ground. The seeding machine was a one and a half metres high contraption with a blue seeding box on top, a red axle and nine "Scharen". Father led the Flora and I hurried behind the train to remove potato bushes and other greenery from the seeding machine with a spade. Afterwards I let the "Share" into the ground with a long lever, lifted it during turns and led it across turns. This continued for each turn until the entire field had been seeded. During spring overwintering seeds were cleaned from weeds by hand.

Towards the end of the hay month (june) the growth or corn, as we used to say back then, was ready for harvesting. Now the mowing machine, which since the first cutting of hay was stored in the lower barn next to the manure machine. For me this Deering-Machine was a technological wonder. I admired the mechanics. Grandfather told me, how in the 19th century the parts of the machine were brought in a large wooden box by ship from America overseas to Rotterdam, then with a Rhine ship to Basel and finally by train to Kerzers. The village blacksmith then assembled the machine. For this machine there was a wooden offset, a kind of wooden fence that father steered through a pedal from a seat mounted atop the right wheel. With these one could make pretty, regular piles during mowing, which were turned on the rake for drying.
When the corn was dry and the kernels hard, with horse and vehicle and much equipment went to the field. I put the wisps over my shoulders and then one around the other on the ground, with the coloured wooden wheel always on the same side. The stovers painfully scratched legs and feet, and occasionally there was a drop of blood. Salvatore, our first servant from Italy, put two or three stover piles with a fork on the wisp and my father kneed on it and tied them together. What a beautiful look, the sheafs all in a row on the ground. Then one drove with a load vehicle between the sheads and father with a fork put the sheafs on the vehicle, forming a beautiful pile. It was custom that the last load received a pretty posy behind the vehicle. Since we didn't have a direct drive to the farm, hay and grain had to be transported with an elevator. We had an engine, the neighbour had to tie the horses to a rope, which through a wheel worked as the elevator. With another vehicle we could drive across the house to the offloading place. There the sheafs were laid down, one after the other. Right next to it was the chimney for the smoked goods, thus we had to keep a path free so that one could reach it despite the sheafs. Because one could not foresee when the sheafs would be treshed with the treshing machine which was shared between farmers. And back then smoking and slaughtering was done on the farm itself. I cannot forget the "Sichlete". When the grain had been harvested, where oat didn't count, one celebrated the "Sichlete" on the second Sunday of August. Mother for this occasion baked Zöpfe and Tuberugger, a pastry from fermented dough. There was a particularly good midday food, usually ragout with mashed potato and afterwards beans with ham. At the end there was burnt cream or pears with chocolate.

The treshing machine was in the treshing house at the Holzgasse. Barley and sometimes rye which were transported openly were immediately treshed. Usually about the second week of October the treshing machine made its turns. When during the morning the lighs flickered briefly, we knew that the machine was close by, since starting it consumes a lot of electricity. Already erecting the machine with the straw press in the Tenn the evening before was an experience for us children, and the parents had to tell us to not look too closely since the process was not totally harmless. Since one needed six to eight helpers at treshing day, aside from the treshing master and the Aufleger six farmers came and helped each other on this special day. Some carried the sheafs to the machine, the others loaded the balls of straw which came from the machine on the loading platform. A strong man was needed at the seed retrieval part of the machine. There the kernels were put in the Bundessäcke (standardized sacks from the Swiss government). These could be obtained at the treshery of Bulejöggi Fritz. A Bundessack with a red band and a black year number weighted a Doppelzentner (100 kg). A small elevator behind the treshing machine lifted it to the height of the back and then my father or the Silent Ernst carried the sack to the vehicle. Already during the morning rest it was carrying sausages and cheese. The classical treshing day recipe was acid Chabis (Sauerkraut), potatoes, ham and sausage. But she always took care that the two treshers, always working with the machine throughout the season, didn't always eat the same, and sometimes served mashed potatoes with tongue or even a rabbit.
When threshing day ends, father with me went up to the barn, and I was allowed to kill rats and muce with a Scheitel and broom, which liked to hide beneath the sheafs and could be heard running around for weeks. But I had to go away for the cleaning, since it was so dust. When the cereals were handed over at the railway stations, the Bundessäcke filled with wheat, rye or maize were loaded into the railcars. Before that a buyer entrusted by the government, usually a farmer from the area, had already inspected the cereal and taxiert.
This is how the farm year ran without the combine harvester and heavy machinery, and even then it sometimes became spring, new year and Christmas. The farmers then had to work harder yet in retrospect I have the impression that back then there was less hecticness and stress than today. 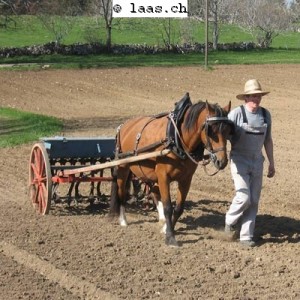