The drying of the Grosses Moos during the Juragewässerkorrektion.

One says that especially this width of the Grossen Moos has defined and still defines the Seeländer in his way and nature.
I'd like to illustrate the circumstances before the first Juragewässerkorrektion; understanding the present is often easier when starting from the past.

The formation of the Grossen Moos
During the last glaciation the Rhone glacier reached the area of Solothurn. When 15,000-10,000 years ago the ice melted, the end moraine at Wangen formed the 100km long and 15km wide Jura Lake. It should not be confused with the much older Jura Sea, which occupied this region 180 million years ago, before the birth of the Jura.
Erosion and the pressure of water eventually broke this dam and the water Levels in the three lakes was eventually stabilized by the alluvial fan of the Emme River.
Subsequent fluctuations in climate and changes in water level formed a large swamp and flood plain where the present-day peat andmineral deposits were emplaced. The different types of soil dominate the Grosse Moos still today and can vary over short distances. I could observe this myself during the different works as part of the Flurgenossenschaft, but also during the work for the gas line Ruswil-Altavilla, where I was observing the Fribourg tract through the Moos as a commissioner for legal and land questions. Until La Tène times 2,500 years ago the Aare flowed into the Murten Lake, these deeps and meanders, that is the old river course, are still visible today and the new biotope are active in these old tracts of the Aare. A typical example is in the Krümmi. Since the end of the 16th century there are reports and complaints about floods and resulting damages in all chronicles. So in 1651, 1789 and 1801. Especially the years 1816, 1831 and 1851 propagated poverty and disease in the Seeland, have to be considered the drivers of the concept of a Juragewässerkorrektion.

Despite all conflict, the Moos towns resisted a general split-up of the Moos and were also opposed to a large scale draining.
On the 3. and 16. May 1817 Kerzers declined such a request of the Oberamtmann. Nobody expected anything good from a lowering of the water table or a splitting of the Moos but especially the high costs were frowned upon.
It took until 1870 for the Moos to be split to major or minor displeasure of the individual towns.
Maybe because of the cost sharing of the Juragewässerkorrektion it was possible to settle the chaotic property rights. The Moos was attributed to municipalities or private owners and marketed. As soon as this had happened municipalities sold large surfaces to pay for debts and to escape the costs of the corrections. Thus according to Löffel in the Münschemier chronicle that town sold 400 Jucharten of Moos in ten years and still couldn't settle all the debts of the JGK.
But also the chronicle of Ried say that 1874 the land, a respectable part thereof was to be afforested along the lake shores along what was then called the "Weg dem See nach" and is today called Galmiz-Sugiez Street, was sold to a Murten citizen for 3000 Francs.
1885 the Rieder sold 68 Jucharten along the road Müntschemier-Kerzers for a price of 50 Francs/Jucharte.

Now after these land sales, the JGK:

The Juragewässerkorrektion was planned following the examples of the Kander and Linth corrections, but it took a long time. Dr. Johann Rudolf, sartor of Meienried and active as physician in Nidau already in 1835 published his discussions about the Seeland floods to propagate his idea. 1839 a stock Company was created and 1842 the experienced water engineer Dr. Richard La Nicca proposed a well-thought out Project.
The cost of 12 million Francs was not simply and scared many away.
Even after the federal government in 1867 authorized 5 million Francs subsidies, cantons and municipalities had to cover large sums.
The first JGK:
The core part is the diversion of the Aare through the Hagneck canal into the Bieler Lake. The deepening of the Zihl and Broye and increased outflow from the Bieler Lake through the construction of the Nidau-Büren Canal and with a yet simple Regulation mechanism in Nidau. Water Levels in the three Jura lakes thus dropped by about 2.5 metres and since then the St. Petersinsel in the Biel Lake is connected with Erlach through the Heidenweg.
The JGK had set the conditions for draining the Moos. Now its inner part had to be drained too. The now required Binnenkorrektion was carried out through the JGK and had the Task to build and maintain canals; the Neugraben, Biebera and Galmizkanal in Fribourg. This correction is still active today and works well, is responsible for the maintenance and mowing of the canals and also of the Erligraben.
For the local drainage the municipalities were responsible. With ditches, later drainages beginning with wooden canals and continuing with clay canals they could use the conditions. This took place on the one hand with the z'Gmeinwärch or like in Kerzers with the Grebeler, Farmers who in winter maintained the canals on behalf of the municipality. However disappointment and annoyance over the high costs and especially the low productivity of the Moos took over. It took years, if not decades, before Moos Farmers knew how to work the newly obtained ground because Thomasmeel and kainite were needed, since potassium and phosphorus were lacking in this soil.
At this time, farmers' associations were founded which bought seeds but also slag and potash in open rail cars and Farmers filled them into Jute sacks. A prototype was especially Witzwil, then Bellechasse and the Culture maraicher then the SGG.
Pioneer in Kerzers was the Pfarrer Schaffner who not only seeded asparagus at the Kreuzberg and sold horses, but also loaned out Moosland from Ried. Including the part Moos on the side of the railway and road after the first Bürgertheil. Then the Pfarrer gave this land to the CUlture, future SGG.
In protocols there is also the pioneer Herr Pudret, director of the conserve factory in Kerzers and future main stock holder of the Cultures maraicheres, the man who later bilt the Keller Villa in Lindenhubel and sought water through a still existing and operating deep well at the Gummenweg for his factory.
Eventually farmers' fatigues led to success and one started to cut up the Mattland. Here too Witzwil and the SGG were in charge. The ploughs often broke at swamp oaks, which had to be dug out. Later in the 40s and 50s Witzwil tried to improve the soil with waste from Bern, which at first succeeded but then went awry because fragments and other non-degradable material build up. Aside from farmers' output one also produced peat, which was especially in the poorer municipalities without Woods an additional source of heat. In the Moos gardens close to towns and other suitable areas especially in the Vormoos one planted potatoes and vegetables, but these had a poor Reputation. I remember that on both sides of the Moosstrasse to Müntschemier everything was z'Wasem.
Thus the music society after the hay harvest could have a flying day rather than a Mattenfest and the biplanes had a long grass runway available. Over time however the entire Moos was broken up and cultivated.
In the records from my father it is noted that in the 5th Radwenge he first broke up ground in 1956.

In summer fires can occur in the soil, that is the peat, of the Moos.Such fires occur usually due to negligence when burning weeds or anti-horse fly cauldrons are emptied. These caouldrons are used to produce a strong, toxic smoke that keeps horseflies away from horses.

With this more intense agriculture the drainages had to be renewed, with collapsed wooden drainages replaced by clay pipe drains, and over time all ditches which were no longer used were covered. At times these were just swampy waterbodies. This intense ground usage with ploughingand harrowing allowed more air to penetrate the soil and thus triggered oxidation or burning of surface peat layers. This is a natural process that occurs when air reaches the peat, that is when it is drained. This natural peat decay and ground collapse eventually lowered the soil surface and caused it to turn swampy again. That began in the 1950s. In not even 100 years since the JGK the Moos had sunk by almost 2.5 metres, that is about the same as the lake level drop in the 1. JGK. The exact rate depended on the soil type; it was most conspicuous in concrete foundations of high voltage power lines and of course on roads, which soon were located on a small causeway.


But already in 1939 the regulating barrier and the sluice of Port was commissioned, this was really the first step of the second Juragewässerkorrektion.

As core parts the Broye- and Ziehl- and Nidau-Bürel Canals were deepened, aside from another regulatory structure at Port.
Coinciding with this second JGK for the Moos and Seelandes, the powerplant and regulatory unit of Flumenthal was built and below Solothurn the Emmenkegel was removed and the course of the Aare broadened. This second Juragewässerkorrektion yielded new findings of the inhabitation history of the Moos, since a number of new archeological findings were found until 1973.

The second Juragewässerkorrektion lasted from 1962. At about the same time vegetable and General agriculture developed strongly in the Grosses Moos. The Grosses Moos became the largest vegetable garden of Switzerland. The mechanization of agriculture started on a large scale and soon obstacles were encountered. The small, narrow parcels, created by the formerly common splitting of fields and also the deformed, often curving and with cross-cutting old ditches and bad paths fields made agriculture more difficult.

Meliorations and mergers of fields became urgent. But what in the 60es was begun with much zeal and entepreneurial thinking was difficult, hard and in Kerzers took an entire Generation. As example for the many mergers in the Seeland and the Moos I would like to describe the Kerzers Werk, a large and long-lasting merger, which I experienced first as Student of the von Grangeneuve, then as member of the executive board, landowner and finally as president. After a little backstory I'd like to illustrate the works and particular problems of the Moos. In particular the then-Oberamtmann Fritz Herren and director Max Rensch from Bellchasse drew in and supported far-sighted farmers, to organize the mergers in the Seebezirk. In Kerzers 533 landowners with an area of 852 hectares voted in favour of the Project against 57 landowners and an area of 139 hectares. That is, over 90%!
On the 24 April 1962 there was the founding session, who would have thought that work would continue until 1996. The costs amounted to about 22.5 million Francs. Of these, landowners had to pay about a third themselves, that is about 6 million Francs. I tried to describe how the Seelanders had managedndled the problems of the Moos, the waters and the weather and always managed the future. Our successors will surely be able to do so as well, and will do what they consider the right thing, so that future generations can have pleasure at the Moos.

For us, who now have inspected the past of the Moos, it would be interesting how it will look like in hundred, thousand or thousands of years "Bi üs im Moos"...it's all the same, anyway!
Let's have pleasure at the present, our Beautiful Grossen Moos.
Ueli Johner-Etter, Kerzers. 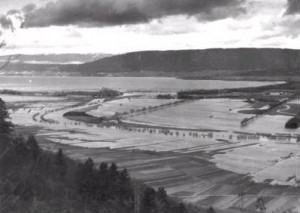