The ergot fungus, Claviceps purpurea, resembles an oversized black rye corn. It is the fruiting body of a fungus. Especially during wet and cold weather fertilization is delayed and Flowers remain open for longer. Especially then the fungal spores have their chance, germinate in the Flower and exploit the seed formation resources.
The German Name "Mutterkorn" ("mother corn") refers to ist medical use. Chemicals in the ergot diminish blood flow through peripheral tissues. In the past it was used to treat overly strong bleeding during birth, thus the Name. For a while it was deliberately produced for the chemical Industry, which synthesized particular medicines. Today they are produced synthetically. Ergot can also affect other cereals and wild grasses, but less frequently than rye. Rye is most affected because it is wide open during flowering and thus spores end up on the ovary. 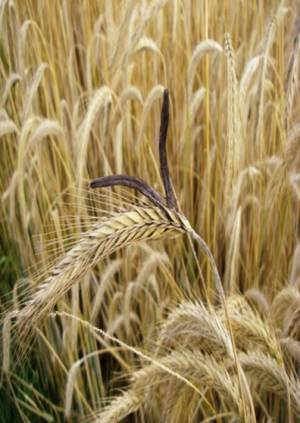