A medium to large sheep with black Roman head. Rams carry evenly curved horns whereas females are polled. Animals have medium-sized to strong legs with tight ankles and hard claws. The silky shining straight wool is grey, seldom white with longer and coarser upper hair and fine hair beneath.
Best suited for high mountains through excellent safety when moving, resistance and adaptability and best adaptation for regions with high precipitation and extreme sites.

The Tyrolese Steinschaf developed form the Zaupel and local autochthonous breeds. Oldest Tyrolese sheep breed that remained after strong decrease in Tux valley and was then bred there. Herd book foundation in 1973.

Today, the breed Tyrolese Steinschaf is mainly found in Ziller Valley and Eas Tyrol, but also in Salzburg, Voralberg, Styria and Carinthia.

It is well suited as maternal basis for extensive lamb production and is used for landscape management in the Alps. The wool for clothes is durable and non-fading.

The ideal-colouring of the Tirol stone sheep, bright Silver-grey, ist caused historically. Till the middle of the last century on many farms in manual labour made loden cloths should be from nice silver-grey colour. Out of this loden cloth it is made because of the "Tuxer of cardigan", as a uniform component of the Zillertaler national costume. It is striking that this grey loden cloth is insensitively against every influence of light, he does not fade! Till this day becomes of the "Tuxer" festive occasions of the bands, protection companies and national costume groups of the whole Zillertales, but also in other regions, carried with pride. 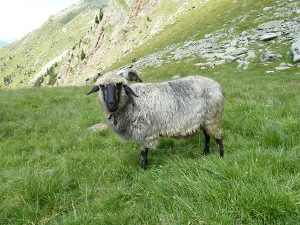