In German called "Allmende" from Middle High German "algemeinde". The Commons once were all lands used in communitary form, including Meadows, Woods, Pastures, Heaths, Quarries, Bogs, Fisheries and Hunting Grounds within a village's territory. Commons are known since the 10th century; possibly however they existed since 0 AD in lands populated by Germanic people and in Ancient Greece. Aside from several mountain regions, there are no Commons in Europe anymore.
In Switzerland former Commons sometimes are owned by civic associations. These are often still operated communitarily like a Commons. Some municipalities still own entire mountains like e.g the Matterhorn and the associated ski lifts. 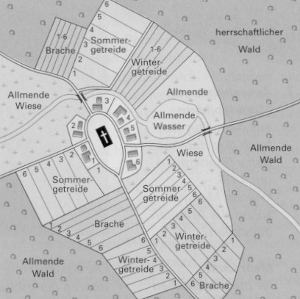