There are many usances and traditions around Christmas, which go back to pagan times. On the 4th December of every year the branches of decorative fruit and flower trees are brought into the wintery rooms and put into fresh water so that they blossom on Christmas. The deep symbolism of this has to do with death and rebirth. The flowering of the Barbara branches brought back hope to humans, that the dismal dark times pass and that the light of the sun increases after Christmas night, slow but certain like the blossoming of the flowers.
One of These traditions is to put on the 4th December, the Barbara day, freshly cut cherry branches in water, which shall then bloom until Christmas - which should bring luck. This is the only still active cherry tradition in Europe.
According to Christian legend the virgin Barbara on the 4th December 306 was martyred for her hard faith. On Christmas then the flowers on her grave blossomed. Faith and superstition has to this day sustained the tradition to put a cherry branch into water on this day.
In many regions ever member of the family receives its own Barbara branch. The one which on the 24th December has the most beautiful branch can expect the most luck in the next year.

Even today one remembers this tradition and puts freshly cut branches and twigs into a vase. Around Christmas in the warm room the buds open and fresh green and pretty flowers appear in winter. This tradition can be run not only with cherries but also prunes, almonds and forsythiae. Among flowering trees many genera and species can be used, Maule's quince, laburnum, broom, ribes, Hazel, Willow, sloe and European Cornel. Not only flowering plants can be used, birch branches look Beautiful when the luminous green leaves sprout.
To secure flowering it is necessary to cut the fresh branchlets long or to work the Wood with a hammer before putting it into water. The water absorption capacity thus increases and favours the blooming of green and flowers. Evergreen twigs, trees or decorated structures brought life into Rooms for centuries later, when everything outside was buried under snow. Barbara twigs and the Luzien wheat. They are connected with the calendar saint of beginning December (Barbara) and 13th December (Luzia).
Barbara twigs were a Harvest and love oracle. To guarantee their flowering one has to cut them in particular conditions (before sunrise or at vespers), water them and put them close to the oven. One believed that the more leaves and flowers appeared on Christmas the bigger the later Harvest. The twigs were sometimes equipped with Name tags in order to clarify one's own fate. In Vienna the Cards carried numbers. If a Flower appeared the number was put in a lottery. Since magical traits were attributed to the Barbara twigs, they supposedly made hidden Things appear when brought to Christmas mass. 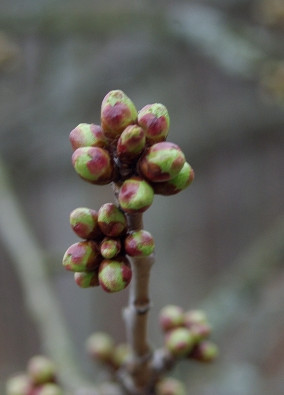