The stem form of the European domestic duck (Anas platyrhynchos f. domestica) is the mallard (Anas platyrhynchos), to which it resembles a lot. The domestic duck is widespread around the world and was so also in Central Europe. Everywhere there is sufficent green land next to waterbodies such as ponds, ditches or streams, ducks exist as a typical animal. Ducks are omnivorous and comparable in that regard to pigs, ducks are even less fragile and easier to breed than geese. Ducks are used in many ways. They give good meat, many eggs and feathers.
The autochthonous duck races of the Alps only include the Austrian Land Duck and their mutant, the Haubenente. In Northern Italy Land Ducks were widespread as domestic ducks, today all Italian land races are extinct. In Bavaria and in Switzerland the Pomeranian duck is still kept, together with the Austrian Land Duck it is among the last Central European races of land ducks.

Land ducks are not deliberate breeds, but instead developed during domestication. The (European) land ducks resemble the mallard but are heavier.

All of Europe; today there are only a few races in small numbers 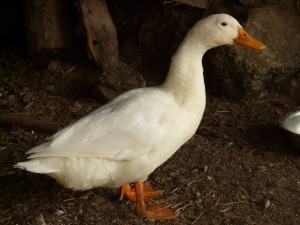