The domestic Turkey (Meleagris gallopavo). Turkeys belong to the order of chicken birds, the genus is only represented by one species the domestic Turkey (Meleagris gallopavo) and seven subspecies. Turkeys have a pronounced gender dismophism, the male animals weigh about twice as the female ones.
Already 500 AD did the indigenous inhabitants of North America domesticate the Turkey. In the Central American Aztec culture of 14th-16th century Mexico the domestic Turkey was an important source of meat. According to R.D.Crawford (1984) the first Turkeys were probably imported in the early 16th century by Spanish sailors as so-called "Indian chicken" to Europe and spred wide.
There are no autochthonous types of Turkeys in the Alps. Around 1900 aside from the common Turkey there were the large, heavy, bronze-coloured Turkeys, black Turkeys, white or so-called Virgin Turkeys, yellow and red Copper Turkeys, blue or spotted Turkeys. Among the rare Turkey breeds in Austria, Germany and Switzerland are the Blue, Bronze and Cröllwitzer Pute. In northern Italy the only widespread breed is the Bronzato comune. 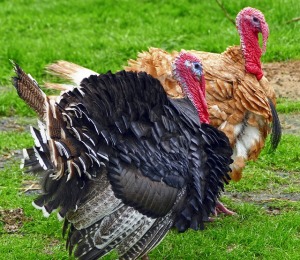