Pigs are among the earliest domesticated animals. It is kept for meat production already since 9,000 years. The oldest domestic pigs already came during the Paleolithic from the Near East. Over the Danube and Mediterranean they came to Central Europe and the Alps. The domestic pig became an important meat supply owing to its fertility and fast growth for early Farmers. Intensive pig farming however was only possible with good Food. Leafed mixed Forests and especially oak-Hainbuchwälder formed an ideal Food source for forest pasture. Thus the Level of agriculture also informed the intensity of pig keeping.

Gurktalerschwein, Graues and Schwarzes Kärntner Landschwein or Bayerisches Landschwein - These names reflect only part of the now mostly disappeared Variety of the Alps. In Austria alone there were over 20 different pig races in 1900. From the roten Bayerischen Landschwein in the northern Alps it ranged to the schwarzen Krainer Schwein and the Krskopolje Schwein in the southeastern extension of the Alps close to the Adria.
Until the mid-20th century pigs were among the fixed components of farms. In milk alps pigs were used to process whey and thus as part of a circular economy. The industrialization of agriculture and the English concept of race breeding the unimproved strains lost importance through crossbreedin. New breeds became more and more important and displaced the races based off medieval Landschweine. In 1863 in Hamburg English Yorkshire Pigs were presented, that was the start for the rebreeding of the Landschläge to the weissen Deutschen veredelten Landschwein. 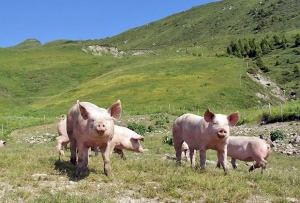