The base form of the house donkey is the African wild Donkey. It is subdivided into three subspecies: The North African Wild Donkey (Equus asinus atlanticus), the Nubian Wild Donkey (Equus asinus africanus) and the Somalian Wild Donkey (Somalian Wild Donkey). Equus asinus atlanticus was extinct already in Roman times. The Nubian Wild Horses, the main ancestors of our domestic Donkey (Equus asinus asinus), are also threatened with extinction. They are gray-yellow, have a noticeable transverse trace, the so-called shoulder cross, and while legs. They have a withers' height of 110-122cm.
Mules and hinnies combine the advantages of horses and donkeys. They are stronger than donkeys but not as nervous and susceptible to diseases as horses. Their cross-breeding also induces the "heterosis effect"; the offspring are superior to their parents in health, longevity and performance. Mules are bred from female horses and male Donkeys. They resemble a horse more than a Donkey. Hinnies are bred from female Donkeys and male horses.

In Switzerland, spices, salt and cheese was transported by Donkeys in the 19th century from Central Switzerland over the Alps into the Piemont. In the ending 19th century mountain passes became roads and the Gotthardbahn in 1882 took over transportation - the job of the Säumer and their Donkey transports were no longer required.

In France too Donkeys accompanied herders on their days-long marches from the Basse-Provence to the winter pastures in the Alps, since and probably from before thebeginning 14th century. They were used as pack animals for the cargo of the herders, salt for animals and lambs born on the way. The development of railways in the end 19th century and then in the second half of the 20th century cargo trucks replaced Donkeys. Because of their social demeanor Donkeys are now gaining value as pets.

Donkeys have a reputation for stupidity and stubbornness because in danger situations they do not flee, rather they stand firm and make noises.
Donkey ears. After birth, donkeys have folded ears, thus folded pages are also known as donkey ears.
Donkey bridge. Donkeys don't like crossing water since they cannot see the depth and apparel of the gound through the reflecting water surface. Thus if a cargo dnkey was supposed to cross water, one had to build an ad-hoc bridge across the water. Like the proverbial dnkey bridge, thee bridges were a small effort or roundabout turn, which often however got to the destination faster. 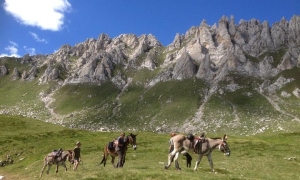