The wild form of chickens is the South-East Asian red junglefowl. It was domesticated starting from 8000 BC in South-East Asia and China. Beginning from 4000 years ago they came into the Middle-East through the Silk Road and into the Alps around 600 BC. Chicken are among the most widespread and intensely used domestic animals. Their great economic importance is mainly a consequence of the ease of keeping and reproducing them, as well as the high nutritive value of their products (meat and eggs)
Starting from the mid-19th century planned breeding took shape in Central Europe. The necessity of autarky during the Crisis years of the early 20th century and the increasing demand for meat in the Alps led to the development of dual use races and meat races (Swiss chicken and Sulmthaler chicken). Aided by the high reproduction rate and the ease of keeping already in the 19th century rebreeding took place by selection and the use of foreign races. Some of the few "domestic" races are relatively recent and often have foreign roots such as the Schweizerhuhn (Orpington X Wyandotten).
The today used industrial breeds owing to inbreeding for a few performance metrics are massively impoverished genetically. They have lost about 90% of their original genetic material. Important information for the immune response is concentrated in the Genome. This genomic impoverishment renders the animals more susceptible for diseases such as Avian flu H5N1. By contrast, extensively used chicken species have a Broad genetic basis. They are thus an important gene pool for breeding. Owing to their small population size however Special genome conservation programs are necessary. 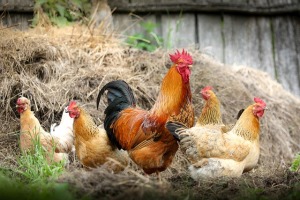