5000 years ago the first wild horses were bred, especially in the forest steppes of Siberia and Southeastern Europe. Starting from the chalcolithic horses appeared in the lowlands outside of the Alps in Central Europe and became more common towards the Bronze Age. Until the Roman period however horses were rare in the Alps. With the Roman legions relatively large horses came to the Alps, export of which over the Danube was banned. The Military horses of the Romans were 1.4-1.6 meters high and thus smaller than today's Noriker. Aside from the tall Roman horses there were also much smaller Celtic horses, bred by breeding with local horses.

Mules also came into the Alps with the Romans, who already used horseshoes. They did not however find a harness that worked for horses. Only in the 9th century did the invention of the Kummet allow the use of horses as working animals and thus revolutionized agriculture. The before used harnesses were unsuitable for pulling heavy loads as they choked the horses. Thus until the 9th century horses could only pull light carts and no heacy work. With the Kummet their working ability and speed quickly exceeded that of oxen.
Originally robust and primitive mountain horses were widespread across the Alps. While North of the Alps and in the Puster Valley it was the midsized heavy Norish horse, lighter types existed in the South. From Antiquity until modern times aside from oxen horses and mules were indispensable for across-Alps travel. Only the horse allowed the population and economic activity of the high-altitude Alpine Valleys. 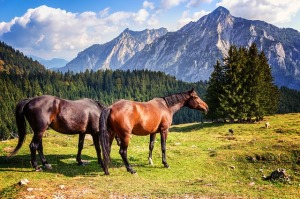