To no other domestic animal humans have developed such a strong - especially emotionally - tie as to dogs. The relationship between dogs and humans goes back to the ending Ice Age. It is thus the oldest pet held by humans. In its long time as domestic animal dogs have been modified in many ways by humans to accomodate various uses, be it aiding hunts, sledding, guard dogs or even pets. This Variety of usage is expressed by the 150 recognized dog races.

The wild form is the wolf (Canis lupus L.). The domestic dog probably resembled Wolves for a long time.
At first, dogs were mainly employed for Herding and when Hunting. Later they were used as guard dogs. In urban areas there also were small "social" dogs. Dogs were also used to combat Household pests like mice and rats.
160 years ago the Sennenhunde of the Alps were short-haired, mid-sized and multicoloured Spitz-like dogs. They were used for Herding and guards on the Alps. True Shepherds did only exist only in the Bergamasker flocks and in the Valais. The French Berger de Crau and the Italian Bergamascer Herding dog, for sheep and goats, are among the classical Shepherds of transhumance closely tied to the Alps. Both were replaced by the Belgian Shepherd and the Border Collie. Thus their existence is considered to be threatened.
In the Main Alps and in South and East Tyrol one sometimes still finds the typical Bergspitz as accompanier of Alpine herders, it is mainly used in the alps and courtyards as driving dog. It is specially adapted to the particular use in the mountains. The Spitzes are probably among the oldest forms of domestic dogs and were widespread even outside of the Alps. The Austrian and German Pinscher are also closely linked to agriculture. The Old German guard dogs are closely tied to the northern Alps through the centuries old tradition of wandering shepherdry. The various types have developed in Response to specific local conditions. The racical breeding of utility dogsin the Alps only commenced end 19th-beginning 20th century. Professor Albert Heim, the "Father of Swiss Sennenhune", set the standard for many former farmer or cow-er dogs and obtained their recognition as their own race. 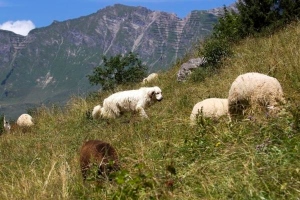