The domestic sheep is the domesticated mouflon and was domesticated about 9,000-11,000 years ago. Since about 5,000 years sheep aren't kept solely for their meat, but also for their wool. Together with goats they are among the oldest domestic animals that humans keep. Already in prehistorical time sheep were herded above the tree line in the high Alps. Sheep are robust and do not require much. This makes them adaptable to harsh climatic conditions and poor Food supply, aiding in their worldwide spread.
The "Torfschaf" of the Swiss stilt house culture is the ancestor of a number of sheep races in the Alps, such as the Bündner-Oberländer-Schaf. Sheep keeping had a high Level in the Roman agriculture. In Italy large sheep Herds were kept, which in summer grazed in Alpine Meadows and in winter in the plains. Sheep had an important role in the old economies and served as a supply for wool, milk, meat and fur. Among others sheep supplied the raw materials for glues, candles and soap (sebum) and cosmetic items, the intestines were used to produce sausages and for tennis bats, and both sheep dung and unusable wool fragments serve as fertilizer.
In Central Europe, sheep are used for landscape maintenance. Sheep wool has a high heat capacity.
Most of the sheep races presently used in Western countries are breeds created in the 18th century. Sheep keeping in many cultures was an important alternative in agriculture. Sheep keeping became important in the lowlands and the Prealps. Aside from the subsistence economy, which was supposed to yield wool, fur, meat and milk, the systematic sheep keeping of the landed gentry aimed at obtaining fine wool.
It's mainly intensely used races which are kept in Europe for meat production. The European sheep Herds are shrinking. Very low wool Prices and strict EU rules are important reasons. In addition, rough wool from traditional sheep races is seldom used anymore. 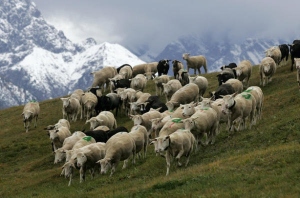