The frequency of harvests in the Alps fell into a spectrum from sporadic use to multiple uses every year, thus fell into a broad spectrum. In intensely cultivated areas pastures and agriculture were combined in various forms. In the remote mountain landscapes either pasture or woods were used, depending on terrain. There are no clear boundaries, especially as far as fire economy and hay were concerned.
Aside from summits, which only attracted interest by the alpinism of the late 18th and 19th centuries, already at the beginning of the modern age there was very little land that has not been used. Records of the colonization of unused land when closely analyzed often actually talk about extensively cultivated land.
Many of these deal with broad, deep vallys, indicating that these areas were subject to high colonization pressure. Riverine land could change appearance every year and thus were cultivated in a very extensive fashion. With small canals and levees constructed by the local population, in the early modern periods sometimes noticeable growths in productivity ensued. Beginning with the 18th and especially the 19th century the large river modifications and meliorations began. These undertakings were increasingly aided and controlled by government institutions and had a program-like character. These projects were implemented at different times and in different actions but before 1900 all major rivers and „golfes de plaine“ had been targeted: Durance, Isère, Rhone, Rhein, Inn, Salzach, Enns, Mur, Drau, Tagliamento, Piave, Etsch, Adda Ticino, Bora Baltea and so forth. In these areas agriculture profited from favourable climates. For these however control structures had not just to be built, but also maintained. 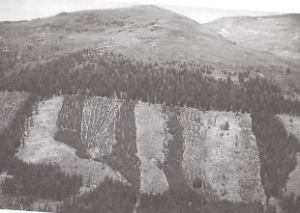