Integrated farming is a further development from integrated crop protection, which had been developed in special cultures of the 1960s. In fruit farming, pesticide use had already by the 19th century spread resistance against fungicides and insecticides in fungi and insects. When large losses began to occur despite pesticide use, the search for alternatives became inevitable. Because of this, an effective use of the means and lower costs of crop protection were also important factors.
Hans Luder, master farmer and a member of the OGG commission, in 1986/1987 proposed "to create a special tag" that would allow to require higher prices for products "made following a to-be-defined guideline for integrated production". In spring 1989 together with colleagues he founded the "Swiss Union of the Integrally Producing Farmers and Farmeresses" (IP-Suisse).
For the farmers of IP-Suisse one factor was particularly important: The practicers should have an important role even with progress of agricultural techniques and enter into direct contact with consumers. With the beginning of the 1990s they joined into so-called IP-Rings together with agricultural advisors, in order to clarify and work on the possibilities and limits of a sustainable food production and its effects on species diversity and the shaping of agricultural land. 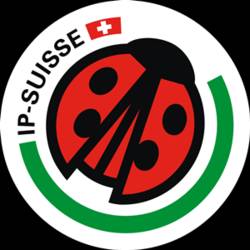