Brigasque are medium-framed and light sheep. Fully-grown rams weight 70kg on average. The wool is unicolored white, head and legs are red marbled with brown hair. The wool is of lesser quality. The breed has a pronounced Roman nose, both sexes carry horns, whereby the twisted horns of the rams stick out widely from the head.

Most probably, the breed developed through crossbreeding local sheep with the Italian milk sheep breeds Delle Langhe and Frabosa. Before World War Second, the breed consisted of several thousand animals. The continuous decrease of population numbers is connected with decreasing availability of sites along the Côte d’Azur for winter grazing and decreasing milk processing and marketing.

Brigasque sheep were formerly widely distributed in the whole Roya Valley close to the Italian border, mainly in the canton Tende and in Brique. Brigasque are also found in Italy, where they are often crossbred with Langhe sheep.

Brigasque are very robust milk sheep and well adapted to the Mediterranean climate and to mountain regions. Their milk is used to produce fresh cheese.

Animals are kept as shepherded herds during summer; they mostly remain outside during wintertime, too. 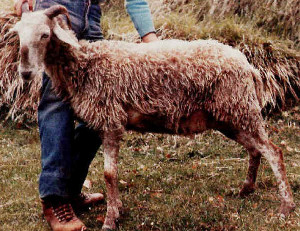