Brianzola is a large-framed sturdy meat sheep with plain white wool. The head is relatively small and longish, the nose has a Roman profile. The lop ears are narrow. Both rams and ewes are polled. The legs are strong and sturdy. The udder is very well developed.

Brianzola is regarded as autochthon and was the most widely spread sheep breed in Lombardy and the Southern foothills of the Alps before the Second World War. The breed is considered a cultural heritage of the region.

Main area of distribution was the triangle of Como, Lecco and Monza and east of Como Lake.

The breed is often keep in small herds for meat production, mainly for own consumption. The wool is sold via regional markets.

The animals are mostly kept in small herds in family farms. During the summer they stay on Alpine pastures at an altitude of approx. 1300m. During the winter they freely roam around the stable. 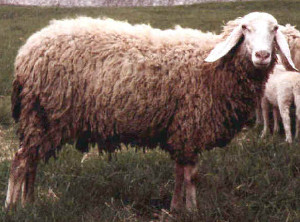