Lamon sheep are large Alpine sheep with yellowish white wool which is long and rough with coarse cover hair. Markings on head and legs occur only seldom. The tail is thin and reaches down below the ankle joint. Both rams and ewes are polled. Most animals have long lop ears, ears may, however also be of medium length or short, some animals even don’t have auricles at all. The head is longish with Roman nose.

The breed Lamon belongs to the groupe of Lop-Eared Alpine sheep (Eaap: Bergamasca-group). In the first half of the 20th century, Bergamasca rams were used to improve the mat performance of the breed.

It’s originated in Veneto Region. The breeds’ present area of distribution is the community of Lamon, in Belluno Province, and Fierozzo, in Valle dei Mokeni, Trento Province.

Lamon are nowadays mainly used for mutton production. In former times, animals were also used for wool and milk production.

Lamon are still very well adapted to very different climate and food regions because of the continuous transhumance that lasted for centuries. During the winter months, they grazed areas around the farms, in the summer, they moved up to the Alps. 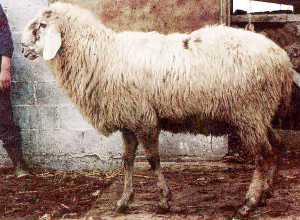