A lot of old cultural techniques have been in use in the alpine mountains much longer than in the lowlands. For example rye was cultivated as a bread grain in the inner Alpine regions even longer as in lowlands, because of its draught resistance. Therefore a lot of varieties could be saved into modern times. Sickles have been used for the harvest of grain much longer than elsewhere, although it is four times less efficient as a scythe, but the loss of grain is much more lower during moving an so the yield is higher. This is important because the yield of mountain grain is usually very low. It is much easier to transport light-weight wooden ploughs from field to field as heavy iron ones. The flail provides an unbroken straw that can be used for weaving.
The use of traditional cultural techniques makes definitely a rational and economic sense. Unfortunately a lot of technologies of the Alpine agriculture have been lost together with the breeds and the varieties. Once, each tree of a chestnut grove had a special function: The one provided farinaceous fruit pulp to dry and mill, the other one provided crunchy, short shelf lived chestnuts which could be roasted, the third supplied good storable fruits. The chestnut tree was the «bread tree» of the mountain peasants of the south Alps and it was cultivated over many generations. This fine balanced system goes lost and forgotten, such as lots of others ancient cultural technologies in the Alpine regions. Without this immaterial knowledge the conservation of the chestnut as a cultivated tree is as impossible as the conservation of the woolly pasture pig and many other plants and farm animals.

Various forms of agriculture in the Alps
Since the early modern era (16th century), in the Alps there was a notable difference between the farmed regions of the Western and Central Alps and the large farms of the Eastern Alps. Elevation discriminates between agricultural and pasturing areas: Valley are used by agriculture and mountains more for grazing. The variation is and was large: 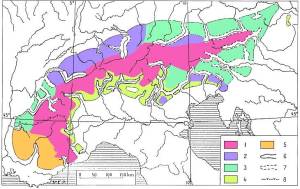