The conservation of our agricultural crops is a basic concept for the feeding in the future – not only in the Alpine region. Here you can find a summary and weighting of some techniques: PlantConservation.pdf 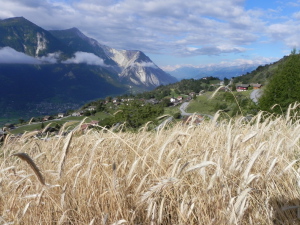 The most ancient agricultural traces in the Alpine region go back to the sixth pre-Christian millennium. From the beginning on, the most important cultivated plants were fibre plants, grain and legumes. The proso millet (Panicum miliaceum) exists for 3’000 years, rye, oat and millet appeared a little bit later. The first settlers collected also wild plants, such as blueberries, cranberries, berberis and elder. About 2000 B.C., apples, pears, cherries, plums and nuts were cultivated. The first selection of wild forms took place.
For the nutrition of people up to the high-Alpine regions, plant cultivation played a paramount role besides livestock breeding in agriculture. Farmers developed an enormous know-how about their crop plants, which passed on from generation to generation. The global warming during the Middle Age supported the expansion of areas used for agriculture, in particular the expansion of grain farming. The primary goal was the self-sufficiency. The foods, which couldn’t be produced by them were acquired nearby or in far off areas.
At the end of the Middle Age, the buckwheat appeared and as a result of the discovery of America, a whole bunch of crop plants, as maize, potatoes, bush beans, runner beans, and pumpkin were introduced.
The industrialisation and the globalisation of the 19 century, supported by better transport facilities, resulted in big changes for tagriculture. The work-intensive cultivation in higher altitudes was by and by given up. Fruit growing benefited from these developments, the export of fruits from the main valleys increased. The woman farmers, who did the field work had more time for their vegetable gardens, due to the renunciation of the fields. The diversity of the vegetable gardens increased, those of the fields decreased. Today the vegetable gardens have become less important. Fewer people work in the agriculture today, less people live in farms and therefore the demand for the own vegetables has decreased massive.
As a result, a lot of crop plants are cultivated no longer and therefore fall into oblivion. But the diversity of ornamental plants has raised significantly.
It’s important not to lose the traditional knowledge of the cultivation of the agricultural crops. But not only the knowledge should be maintained, even the appropriate infrastructure, like cleaning and drying systems and engineering for the processing are required. The cultivation of crop plants in mountain areas could become economical attractive again, especially considering the climate change – although the yield of the adapted local varieties will remain quite modest.